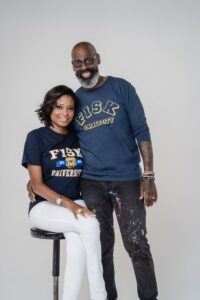 Action for the LA Lakers, has been appointed to Fisk University’s inaugural Diane Nash Descendants of the Emancipation Chair at the school’s John Lewis Center for Social Justice.

The Diane Nash chair was established in May of this year through a $2.5 million grant from Amy and Frank Garrison. A portion of the grant funds the endowed chair, which recognizes the contributions of Dr. Nash, a former Fisk student and renowned Civil Rights activist.

Dr. Brown brings extensive experience as an author, educator, social scientist and organizational change leader to this important new Chair. She is assuming the role for this academic year, and will be joined in her mission, to reinvigorate Fisk’s initiatives in race and social justice, by her husband, celebrated fine artist Charly Palmer. Together Dr. Brown and Palmer will focus on infusing Fisk’s curriculum across all disciplines with action-based programming that builds social justice into the academic experience at Fisk.

“We are committed to continue to be at the center of the national conversations around race relations and social justice and are so excited by the depth of expertise, passion and leadership that Dr. Brown brings to our students and the John Lewis Center,” said Jens Frederiksen, EVP at Fisk. “We are equally excited by the partnership between Dr. Brown and Charly Palmer, a highly respected artist who has made the celebration of Black life and history his life’s work and who was asked by Time Magazine to create its cover for its important issue on racial reckoning,” said Fisk Provost John Jones.

As one of the country’s leading historically Black Universities, Fisk has a legacy of leadership in social justice. Both the late Congressman John Lewis and Diane Nash were founders of the school’s Student Nonviolent Coordinating Committee and led civil rights movements in the 1960’s, which led Nashville to become the first southern city to desegregate lunch counters.

“Both Charly and I have pledged to make this a year of impact. To be part of this investment by Fisk to elevate its work in social justice, speaks to our intention to be part of something bigger. We are humbled to walk these sacred grounds at Fisk where so many great Black innovators thrived, including alumni such as John Lewis, Diane Nash, W.E.B. Du Bois, Ida B. Wells, Nikki Giovanni, as well as faculty such as Aaron Douglas and Charles S. Johnson, to name a few. It is our desire to bring our combined resources to this auspicious purpose,” said Dr. Karida Brown.

Dr. Brown assumes the Chair role August 1s for a one-year appointment. Charly Palmer will also begin teaching August 1 for one year, mentoring and instructing Fisk students and Nashville’s rich community of Black artists on finding their voice in the art world, and the intersections of art, business, and race.

In commenting on this year of impact, Charly Palmer said, “Art inspires enlightenment, inspiration and motivation and that is something I can help provide to Fisk students. As Kendrick Lamar said, ‘I’ll give you the game, you go back to the turf and give it back.’ I believe that.”

Fisk University has experienced a major upswing over the past five years with enrollment growth, fundraising records, and significant increases in the academic profile of the incoming classes. The Fisk future looks brighter than ever and the University remains deeply committed to delivering an elite educational experience.

Dr. Karida L. Brown is a Professor at UCLA in the Departments of Sociology & African American Studies. She earned her Ph.D. in Sociology from Brown University (2016), and an M.P.A. in Government Administration from the University of Pennsylvania (2011). Dr. Brown is a multifaceted oral historian, sociologist & educator. She currently serves on the boards of The Obama Presidency Oral History Project and the Du Boisian Scholar Network. In June of 2020, Dr. Brown was appointed Director of Racial Equity & Action for the Los Angeles Lakers. Karida is also a Fulbright Scholar, and her research has been supported by national foundations like the Andrew W. Mellon Foundation & the Hellman Fellows Fund.

Charly Palmer believes that “art should change the temperature in the room.” His artwork chronicles and celebrates the richness of Black life. The Atlanta-based artist has produced work for the Olympics, John Legend and Time Magazine and most recently illustrated the cover of NBA 2K22 video games. As an instructor, he has taught design and illustration and painting, previously at Spelman College. He and his wife Dr. Karida L. Brown are also collaborating with some of today’s leading Black artists and writers to produce a children’s book, The Brownie’s Book: A Love Letter to Black Families, forthcoming with Chronicle Books in 2023.