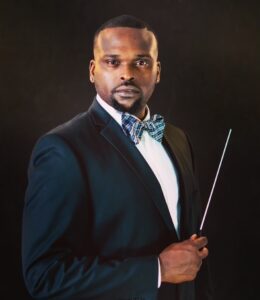 written by: Maya Brown
Fisk University is thrilled to announce Stephan Naylor as the University’s new band director. The Chicago native is a highly skilled musician with nearly 15 years of experience conducting and performing collegiate instruments.

Naylor is a highly accomplished arranger with a wealth of experience in academia. The two-time Howard University graduate holds a Bachelor’s and a Masters Degree in Music Education. As Stephan worked toward his master’s degree, he oversaw a general music education program and served as Band Director at Eliot-Hine Middle School in Washington DC. In July 2017, Naylor began a career in higher education at Elizabeth City State University in North Carolina, leveraging nine years of classroom experience as well as an assistantship at his alma mater. His responsibilities as Assistant Director of Bands included academic instruction in Music Education, Literature, and History, as well as lessons in Conducting, Low Brass, and French Horn.

In addition to the above, he served as chair of several committees: senior hearings, recitals, music auditions, juries, seminars, and assisted with recruitment and public relations.

In his career as a professional performer, Naylor has worked alongside Grammy-winning artists like Neyo and Elle Varner, and held several gigs with the local D.C. gogo group, Future Band.

Vann Newkirk, Fisk University’s President says Naylor’s extensive experience will make an important contribution to the program. He believes that he will be able to help students develop as musicians and perform at a high level.

Naylor has big plans for the band program’s future. During a recent press conference, Naylor described his vision for the band and how he intends to help students reach their musical goals. “Quality of sound! That’s my first priority,” says Naylor. “The Fisk Jubilee Singers have set the tone here, and I want to ensure I maintain that level of excellence. I chose Fisk University because I’ve been given the opportunity and honor to weave this amazing marching band into the fabric of HBCUs and the Fisk University culture. He adds that his primary mission is to keep the culture “alive and thriving”!