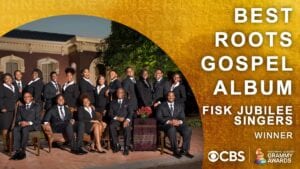 Once again, The Fisk Jubilee Singers have made Fisk proud and brought global recognition to the University. “This Grammy win has been 150 years in the making and it is reflective of the hard work and the fortitude of this group and Dr. Kwami,” said Dr. Vann Newkirk, Sr., Fisk University President. “Fisk is extremely grateful to Curb Records for their involvement on this project and recognizing the role that the Jubilee Singers have played not only in Nashville, but for the entire music industry. We hope this achievement, and the Jubilee Singers continue to inspire young men and women everywhere.”

“How exciting for the Fisk Jubilee Singers to be recognized for their hard work and dedication, not only on this album, but throughout history,” shares Curb Records Chairman, Mike Curb. “I have been blessed to work with Paul Kwami, who is a musical genius and a national treasure. This GRAMMY also honors Fisk University’s 150th Anniversary, which is so important for Nashville and our entire country. This is a momentous day for Fisk, the Curb Records team, and everyone that has been part of this project.”