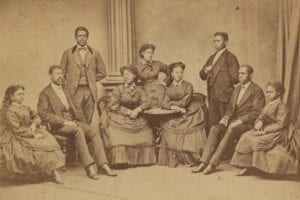 Nashville, TN-The world-renowned Fisk Jubilee Singers® will celebrate the 150th anniversary of their founding with a year-long celebration of events. Organized as a choral ensemble in 1871, the Fisk Jubilee Singers® have played an essential role in introducing and sharing the tradition of the Negro spiritual with the world. This remarkable ensemble has traveled the world singing sacred songs and raising funds to support Fisk University for the past 150 years.

Today, the ensemble continues to perform globally and is comprised of Fisk University students who are selected annually through an audition process. The Fisk Jubilee Singers® have received numerous awards, including a 2021 GRAMMY® nomination for Best Roots Gospel Album for their recently released album, Celebrating Fisk! (The 150th Anniversary Album). The ensemble has been inducted into the Music City Walk of Fame and the GRAMMY® Hall of Fame. In 2008, the Fisk Jubilee Singers® were also awarded the National Medal of Arts, the nation’s highest artistic honor by President George W. Bush.

In honor of the 150th anniversary, a fund has been established at Fisk University. Donations can be made by visiting https://connect.fisk.edu/fisk-jubilee-singers-150th  or be sent to the Office of Advancement Services at Fisk University (1000 17th Avenue, North – Nashville, TN 37208).