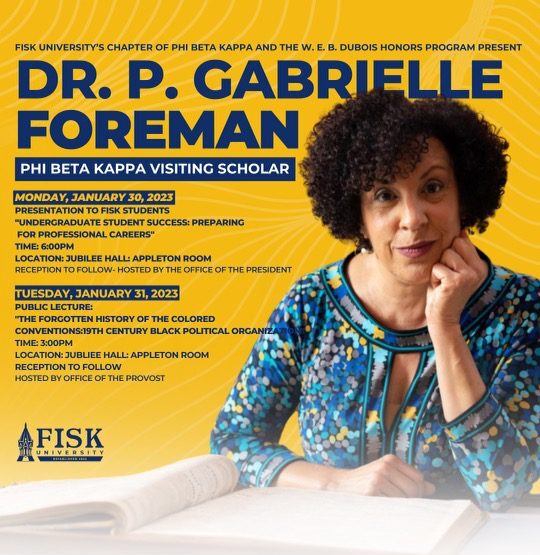 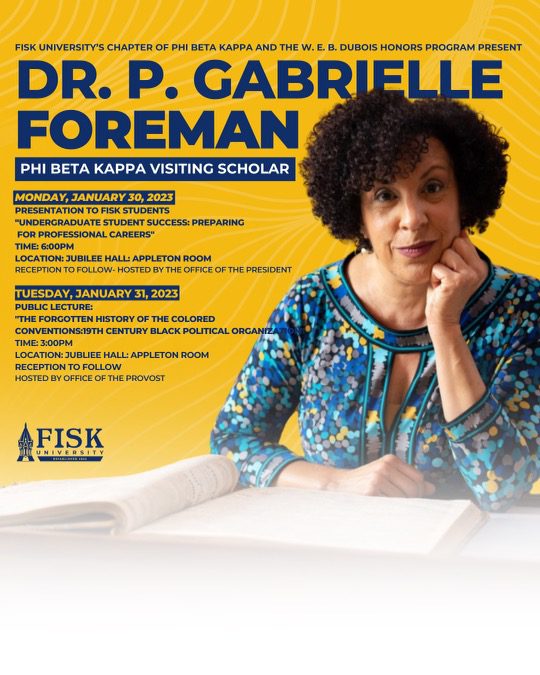 More About Our Visiting Scholar:

Gabrielle Foreman holds the Paterno Chair of Liberal Arts and is a Professor of English, African American Studios and History at Penn State University.

Professor Foreman is a poet’s daughter and interdisciplinary scholar raised between the South Side of Chicago and Venice Beach, California. She is the founding faculty director of the award-winning Colored Conventions Project housed in Penn State’s Center for Digital Black Research/#DigBik, which she launched and co-directs with Shirley Moody-Turner. #DiaBlk is made up of undergraduate researchers, graduate student leaders, librarians, satellite faculty, and arts and community partners who bring the buried history of early Black organizing to digital life.

Professor Foreman is known for her long-standing commitment to working in collectives and to institution and community building. For more than a decade, she’s partnered with renowned dance educator Lynnette Overby and poet Glenis Remond on performances that bring Black history alive on the stage; Foreman is the author of five books and editions. Most recently, The Colored Conventions Movement: Black Organizing in the Nineteenth Century and Praise Songs for Dave the Potter: Art and Poetry for David Drake.

In 2022, she served as the Distinguished Scholar in Residence at the American Antiquarian Society, working on a new book on the founding families of early Black activism. Professor Foreman is a 2022 MacArthur Fellow.