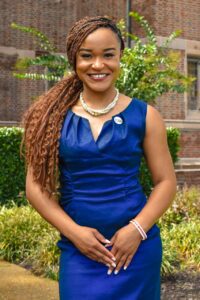 senior political science major and Student Government President, was invited in November of 2021 to interview for what is widely considered the most prestigious academic scholarship available worldwide. Ms. Ashley is the fourth Fisk student to make it to the Rhodes Scholarships finals in the last 3 years. This year, Ms. Saraya Ashley became the second African-American woman from Fisk University to make it to the Rhodes Scholarship finals.

Each year across the nation nearly two thousand university students apply at the campus level; and, eventually, approximately 190 college seniors/recent graduates are interviewed for the scholarship.  The prize provides two to three years of fully-funded graduate study at the historic University of Oxford in Oxford, England. The highly competitive scholarship boasts that the standard grade point average of its winners, historically, is a 3.9.

“Saraya’s global curiosity and tremendous exposure to the application and science of politics make her an ideal person to explore social issues that are exceptionally complex world wide,” said Dr. La Tanya Reese Rogers, director of the W. E. B. Du Bois Honors Program. “She demonstrates the personal conviction, leadership acumen, and keen awareness of human issues at home and abroad that are commensurate with a Fisk education, we couldn’t be more proud of Saraya’s nomination as a Rhodes Scholarship Finalist!” The Fisk community enthusiastically applauds Saraya Ashley’s efforts and her progress.