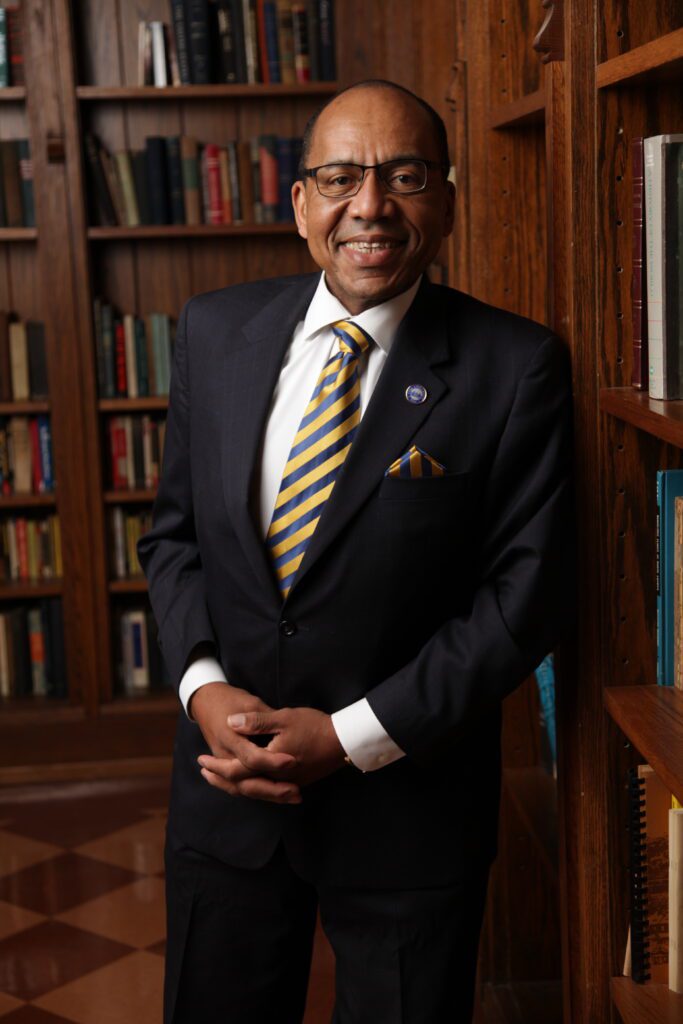 Dr. Vann R. Newkirk, Sr., a native of Elizabethtown, North Carolina, was named the 17th President of Fisk University by the Board of Trustees on February 15, 2021. He served as Fisk’s Provost and Vice President for Academic Affairs from 2018 until his Presidential appointment.

Dr. Newkirk has an extensive leadership record with proven evidence of effectiveness on many levels. For instance, he has a 25-year career in creating innovative educational programs which, have enhanced enrollment, at each institution in which he was formerly employed. Over his career he also built and managed off-campus degree programs, enhanced sponsored programs productivity, and played major roles in the administration of institutional research and effectiveness. Newkirk has worked with organizations such as the SACS Consulting Network, the Capacity Building Institute of the UNCF, and the Patterson Research Institute. In these roles he led more than a dozen colleges and universities through initial accreditation or through reaffirmation with the Southern Association of Colleges and Schools, or with the Transnational Association of Christian Colleges and Schools. Finally, he has played important roles in improving institutional efficiency and in resource husbandry at institutions across the Southeastern United States. These efforts have required consensus building within each institution, inside institutional governing boards, and with state coordinating agencies. Newkirk’s experiences have allowed him to build and maintain relationships with a wide variety of constituencies on all levels.

A noted historian, Newkirk has written extensively on crime and punishment in the state of North Carolina. He is the author of the seminal work on subject, Lynching in North Carolina (2008), which won the Willie Parker Peace History Award for the best non-fiction study of North Carolina in 2009. Other publications by Newkirk include, “That Spirit Must be Broken: The Mutilation of Joseph Needleman and North Carolina’s Effort to Prosecute Lynch Mob Participants During the 1920s,” Southern Jewish History (Vol.13, 2010), and “Washed Down in Blood: Murder on the Schooner Harry A. Berwind,” North Carolina Historical Review, (January 2014). An HBCU advocate, his book, New Life for Historically Black Colleges and Universities seeks to identify the challenges that Black Colleges face, explore the historic origin of Black college management systems, and identify models of success that will improve the long-term viability of HBCUs. He is currently writing what will be the seminal work on the history of African Americans in Alabama.